Performing at the Nordic Museum

Norwegian pianist, Oda Voltersvik, will perform works by Grieg, Sibelius, Rachmaninov, Beethoven & Ginastera as a guest artist of the Northwest Edvard Grieg Society. This special concert is not to be missed by Grieg and piano lovers alike! 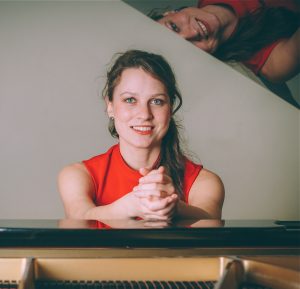 Described as a “pianist with great sensitivity and lovely tone (… ) She has the touch to render the orchestral textures vividly and the technique to tackle the ferociously difficult piano writing with ease” by Marios Papadopoulos, director of the Oxford Philharmonic Orchestra, she has performed extensively worldwide in venues including the Palermo Classica International Festival, the First International Folk Music Festival in Beijing, Carnegie Hall, Wigmore Hall, St Martin in the Fields in the Pianists of the World series, St James’ Piccadilly and concert societies throughout UK. Her concert engagements in Norway include recitals and lunchtime concerts for the Edvard Grieg museum, annually since 2014, and the International Grieg in Bergen Series with solo performances and chamber music since 2010. She is the winner of the Bradshaw & Buono International competition, and a finalist of the London Intercollegiate Jaques Samuels competition at Wigmore Hall in 2016. She has recorded a CD to great acclaim, Khoreia, with the Volt & Potenza Duo on the Velut Luna Label. Oda is also project leader of the Volt Ensemble. For her concert tours she has been rewarded funding several times by the Norwegian Arts Council, Music Norway, Fund for Norwegian performing artists and Bergen Municipality. She holds a Master’s Degree in Performance from the Royal College of Music London and an Artist Diploma from the Trinity Laban Conservatory of Music and Dance with distinction. Her solo debut CD, Firebird, was released in January 2019.  Learn more at her website here.

Want to hear more? Here is the “Air” from Holberg Suite by Grieg.